The Saw Horse on Steroids. Plans are now available!

31 December 2019/Greg Miller/Comments Off on The Saw Horse on Steroids. Plans are now available! 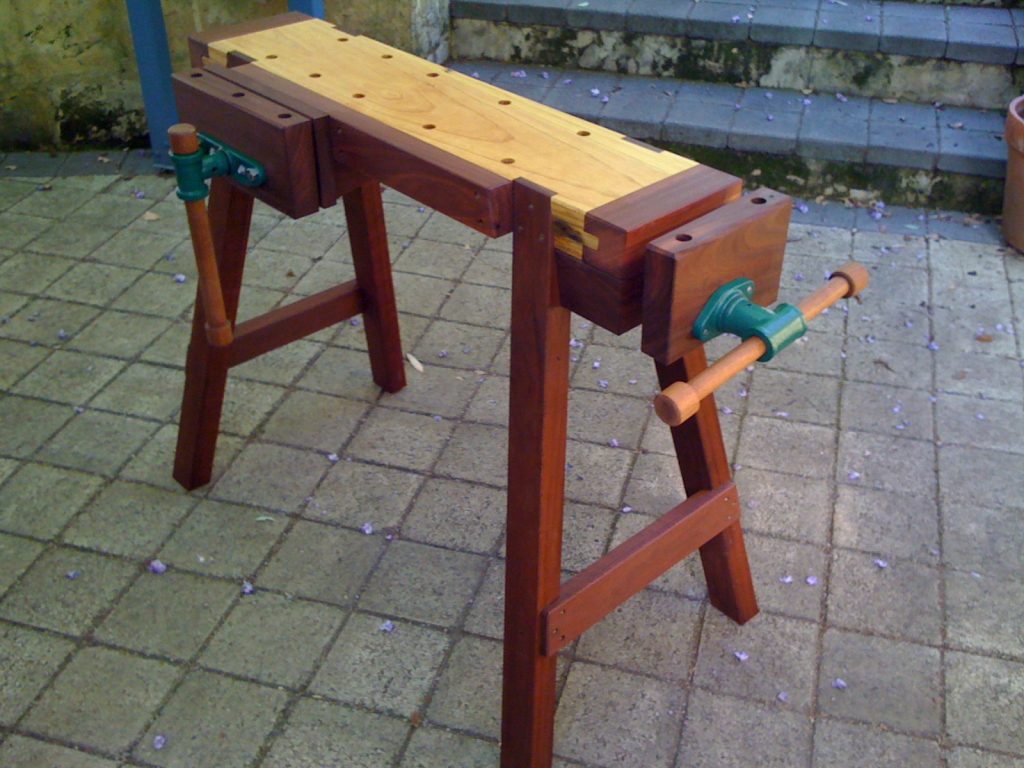 Originally called the “Saw Stool on Steroids”, I posted a blog story in October 2009 about this amazing portable bench with a small footprint and great holding power. It has only taken me 10 years to finally make the plans available for purchase! You can find it here on Etsy.

It is said Necessity is the mother of invention. This bench grew out of the need for a portable solid bench on the building sites I was working on. I was doing a lot of custom work on old buildings, with renovations, repairs and modifications to joinery like staircases, doors, windows, balustrades, frames and sashes. Lots of chopping of mortices, planing and other hand work. It needed to have a small footprint, and have great holding power. One of its great strengths is the holding ability on the bench top between dogs. It proved to be such a versatile bench!

After I first posted about this bench I called the “Sawstool on Steroids” in 2009, it went viral on the internet. People all over the planet were inspired and began making variations on the design. Thus it became apparent from the international readership there was a language problem. In the USA and UK, a Saw Horse and Saw Stool are not the same device, whereas for me the terms had always been almost interchangeable. So over the years I changed the name to the more universal Saw Horse on Steroids. However, with the nature of the internet, it was already out there. So now it exists in cyberspace under both names. That original post, posted at that time on my old blog www.gregdmiller.blogspot.com is still out there. It still remains a major point of traffic for people looking for a great portable bench design.

After a decade of use, the Saw Horse on Steroids continues to evolve.

As I used the original bench, it became apparent it would be handy to have somewhere to put the tools you were using, due to the small bench top size. So very early on, I made a removable tray/shelf which sat across the bottom rails. These are now standard for the bench. You can see one under Tyrone’s bench above.

The primary issue however was the racking of the original vices. The original vices used, with their big turned wooden handles, look very funky. However these vices rack badly. That is, the jaws distort under pressure and don’t maintain parallel either vertically or horizontally when under load. There are ways to address this problem as you use the vices – but it is a bit of a pest. So some years ago we changed to using standard woodworking vices on these benches we make. They don’t look as funky, but they don’t rack badly like the other ones! They are also easier to install. Another adaptation which grew out of years of use and abuse. We have also made some other versions, to suit the requirements of the person who would be using them and their situation.

Here is the link to our Etsy shop, TheJoyofWoodStore :

Here your will also find plans available for: