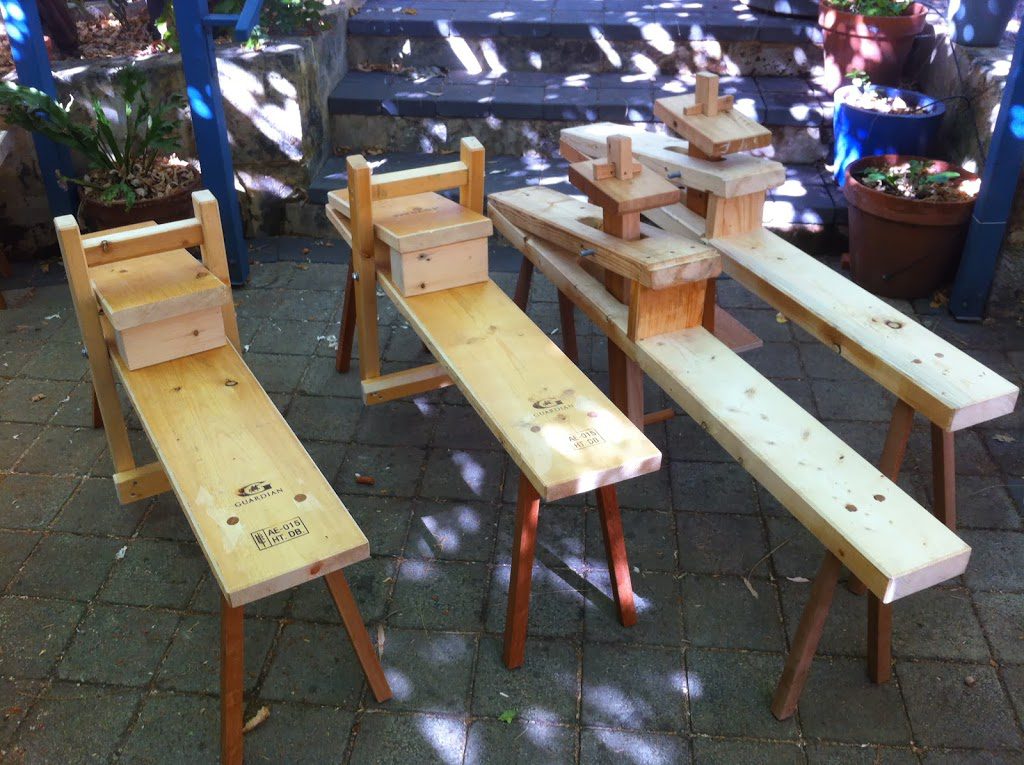 I’ve got about 8 shaving horses, which I use for running public workshops. I had previously made a batch of shaving horses from packing crate material and other recycled wood, which I did a post about  in July 2014.
Since then I have made another version, like a super-modified saw horse. Let’s call it the Mk II – a multifunctional shaving horse and bowl carving horse combo. My favourite horse, it is about 7 feet long, has fixed legs, and a heavy vise built into the tail of the bench. All this limits its portability.

The Mk II has fixed legs, as it is a supermodified saw horse at it’s core. Being all jarrah, it is heavy. It is very versatile in its holding capacity, but there are times when it is too big or tricky to transport.

I was invited by Timbecon to demonstrate Green Woodworking at the Brisbane “Timber & Working with Wood” Show on 15-17 May 2015. With my gear needing to be transported three thousand kilometres across the continent, I had the need to make a portable and versatile bench fairly quickly to catch the truck. Hence the Mk III was conceived. I was going to Brisbane, as the Mk II was not going to be friendly to ship on a pallet of stuff.

OK, so lets make a shaving horse combo which will be easier to ship. This means its got to have folding or removable legs…

Deciding on the Characteristics of the Mk III.Shaving Horse.
I built my first shaving horse, Mr Smiley, at the legendary Roy Underhill’s Woodwright’s School in North Carolina in late 2013. This was a classic “dumb-head” style, made entirely by hand from timber we mostly extracted from the forest using cross-cut saw and axe, then fashioned with side axe, adze, shaving horse, draw knife, brace and bit, etc. Amid the stable of horses at Roy’s, there were a couple of shaving horses of the English Bodger’s style. I particularly liked this style.

Not sure why, but I seem to prefer the English Bodger’s style of Shaving Horse. Hence the Mk II and Mk III were both made in this style.

Veritas Tools used to have free Shaving Horse plans available on their website, which I saw before planning the Mk II. One of the things which caught my eye was the use of the back end of the bench/seat for additional holding options. Now there was an idea…

When doing bowl carving, I have been using a very low wide-topped saw horse which has dog holes in its top for gripping he bowl blanks. What if these functions were built into the back end of a shaving horse? When I made the Mk II, I even installed a big vise in the back end of the bench. Awesome.

As the Mk III was to be portable, I would make the horse a little shorter than the MkII, put a twin row of dog holes in the bench for bowl carving, and not install the vise (which would add a lot to the weight).

Of course, it would be made from recycled wood. I happened to have a couple of ancient house beams, of Oregon (known outside Australia as Douglas Fir). I docked one of these to length, dressed the stick, and bored dog holes in it. It would be a nice solid bench/seat. Jarrah would be used for the legs, treadle frame, the ramp, and the bench accessories. The legs would fold, and be held flat to the bench when packed flat, using a couple of coach screws. To put up the legs, undo the coach screws, fold the legs out, and wind in the same coach screws in at the base of the struts. Solid as a rock.

The Mk III takes about 5 minutes to assemble, creating a very solid saving horse, bowl carving bench, and general low bench. … I do miss that tail vise though!

The Mk III was test driven for the first time at the Brisbane Wood Show. A nice horse too.

Don’t worry, I am already thinking about the possible characteristics of the Mk IV!!
The buzz-“phrase is “Continuous Improvement”, isn’t it?