In Celebration of My Wood Working Heritage

I am fortunate to have benefited from a significant woodworking heritage. Here is a brief look at it. 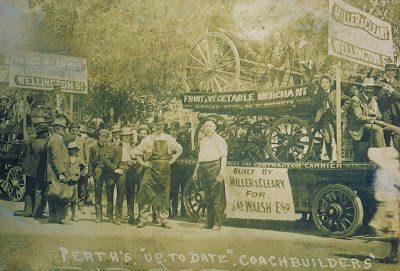 My great-grandfather, William Miller was a coachbuilder and wheelwright, and partner in the coachbuilding business Miller and Cleary in Wellington Street, Perth. The picture above shows the Miller and Cleary display in the 1910 Labour Day Parade. He is the one with his hands on his hips.

William’s son, Frederick, was to become an engineer with the Post Master General’s Office. Fred married Lucy Hall and they had 5 children over 22 years: Ray, Doug, Kit, Ken and Lyn.

Doug started his apprenticeship in 1945 at Povey’s on Stirling Highway, Nedlands. Doug around the time that he finished his apprenticeship. Probably around 1949-1950.
Doug and his mate Dennis Greeve started their cabinetmaking & joinery business in Claremont (later known as Swanbourne) in 1950. They and their wives Gwen and Tress, all partners in the business, would operate for 36 years before closing the partnership in 1986. 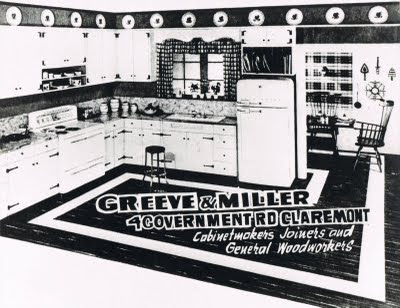 This advertisement was shown at the Windsor Theatre in Nedlands, around 1952. It shows the latest in modern kitchens at that time! 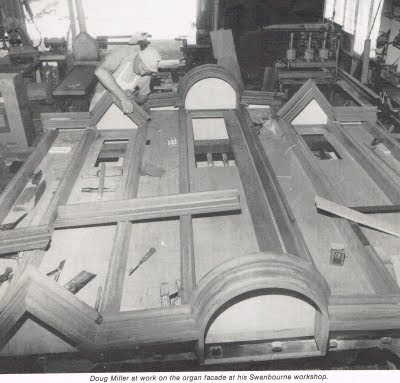 Over the years, Doug built a number of pipe organ consoles, wind chests, wooden pipes, fascias and other components for several Australian Organ Builders. This picture from 1980 shows Doug building the jarrah facade for the Perth Concert Hall Organ.

Dennis’s brother Peter worked for the business for most of those 34 years, and over the time they trained around 11 apprentices. An incredible array and variety of high quality joinery, furniture, and cabinetwork was produced by Greeve & Miller over the years.

In 1988, Mum and Dad retired to Augusta WA, where my wife Rosemary and I and our family were living. We were running our business, Marginata Fine Furniture, in Augusta at that time. Doug was not really ready to retire, so he came and worked with me most days. 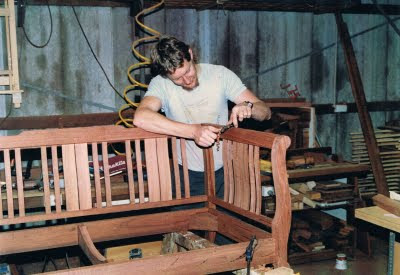 This picture shows me in 1988 making a reproduction jarrah lounge chair for a customer. This was when I started my “apprenticeship”, as Dad worked with me most days over the next 4 years. I was so privileged to be working with him and learning from him over this period.

While a teenager, I was not that interested in being like my father – not an unusual thing during adolescence – however I did learn a lot as a child. I grew up surrounded by the sights, smells, sounds and talk of woodworking. Amazing what we learn by osmosis as children. I was always swinging a hammer and a saw, building tree cubbies and making things in Dad’s workshop. I still have and use some of the tools I was given by him from age 9 onwards. While I went and did other things as a teenager, I soon found those acquired woodworking skills helpful for income generation in the years after I had left school.

Although we live 200 miles apart, Dad continues to be an incredible source of information for me, a great mentor and living treasure trove of skills, tips, experience, and traditional woodworking knowledge. 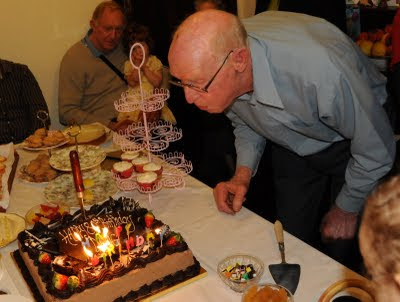 Congratulations to Doug, who turned 80 on 14 July 2009.
He continues to make mostly small things, like boxes and small tables. 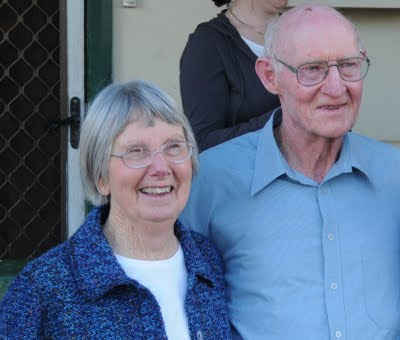 This picture shows Mum & Dad, Doug and Gwen, at Dad’s 80th birthday celebration.
In September 2009 they celebrated 55 years of marriage. I am fortunate to have such wonderful parents, and I owe my Mum and Dad so much for who I am…